I know this isn’t the best quality video or audio, but I figured this would be something everybody had to see.  This appears to be a mid-1970’s era duo performance by Willie Nelson and David Allan Coe. I will note, though, at their peak of record sales popularity, this might not be a performance they look back on as their best work.  I’m not judging, I think its awesome.  So do the youtube viewers, as evidenced by their comments.  Here are a few of my favorites: 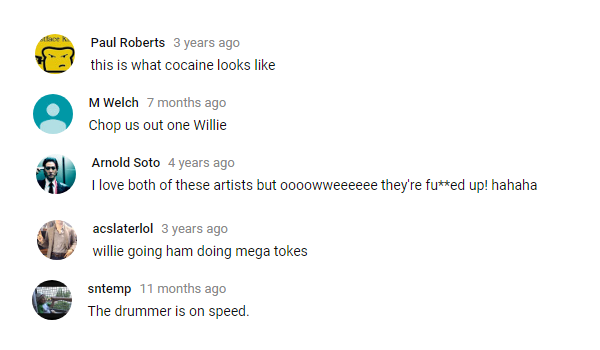 One of my personal favorite parts of the video is where Coe starts playing “It Wasn’t Supposed To Be That Way”, a song of Nelson’s that Jennings is known for covering.  At 3:12, Coe turns around and says “Waylon”, stretches out his hand and then… nothing.  Coe just smiles and Willie starts singing  Was Waylon Jennings supposed to come out and perform, but was otherwise engaged at the moment?  I’m sure we’ll never answer that question, but a Coe/Nelson/Jennings  performance would have been awe-inspiring.

Nothing I’ve ever seen will ever compare with what transpires at the 1:28 mark.  While in the middle of his verse of “Good Hearted Woman”, Willie drops to his knees for an instant, pops back up with a cowboy hat, puts it down low over his eyes and then smokes a cigarette while singing the chorus.

If you were wondering what the song would have sounded like if Waylon would have stepped out on stage when Coe said his name, it wouldn’t sound like the version below, I’m sure.